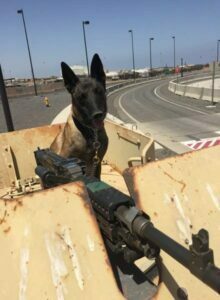 Uu2 N717 served as an explosive detection and patrol military working dog for the United States Navy from June 2010 through October 2019. She was assigned to Headquarters Naval District Washington. MWD Uu2’s overseas deployments included Honduras and The Horn of Africa. From September 2010 to October 2011 MWD Uu2 deployed to Honduras where she participated in anti-drug trafficking missions. Her job was to precede the American and Honduran Security Forces to detect improvised explosive devices planted by the cartel. She also provided physical security. From July 2017 to June 2018 she deployed to the Combined Joint Task Force – Horn of Africa, where she performed explosive detection and physical security missions in support of Operation Enduring Freedom. Stateside, MWD Uu2 has performed numerous missions throughout her career providing explosive detection, physical security and visual

deterrence for two U.S. Presidents, Secretary of Defense, Secretary of State, Diplomats and Heads of State, as well as Military Officials. While in garrison, MWD Uu2 supported base security and anti-terrorism force protection postures for eight installations in the National Capital Region, including the U.S. Naval Academy Annapolis and the U.S. Naval Observatory. Her handler/dad really enjoyed working with MWD Uu2, she was highly driven and excelled at her job. She was always up for a new challenge and eager to learn new skills. Some of her favorite things to do, aside from detection, were running the obedience course and trying to take over his hotel bed and stealing food while on taskers. MWD Uu2 was finally able to retire last year and her handler was able to adopt her in October 2019. She is loving the retired life with all the dog beds, toys, treats, adventures and snuggles on the couch that she so deserves! She loves playing and hanging out with her pack, hogging all the toys, going forwalks/hikes and getting scratches from anyone willing. Her favorite treats are marrow bones, fresh fruits & veggies and dog biscuits of any kind. Uu2 is a sweet, loving soul and her family is so happy she’s part of their forever pack now! 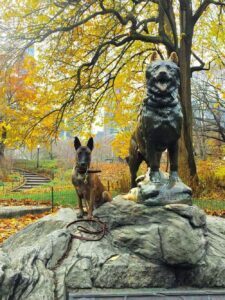 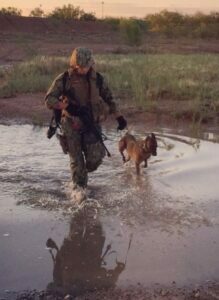 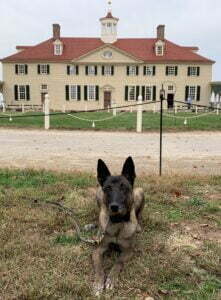 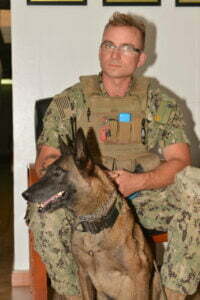