K9 Remi was born in Europe on February 14, 2010. He was purchased by Castle’s K9 and shipped from Slovakia to the United States on February 8, 2011. On February 11, 2011, the Loudoun County Sheriff’s Office purchased Remi and he was partnered with Master Deputy Perry Bailey. The K9 Team was assigned to the Operations Support Division, where Remi worked as a dual purpose patrol K9 and SWAT K9 until he was retired from duty. During his years of service Remi and Deputy Bailey were certified as a K9 Team through the North American Police Work Dog Association (NAPWDA) in the areas of Criminal Apprehension and Narcotics Detection. Remi was very active on the street and was credited with apprehending numerous criminal suspects, assisting with the seizure of narcotics and the arrest of these suspects on a routine basis. On October 7, 2015, due to a torn bicep tendon, Remi underwent surgery and had a partial bicep release on his left shoulder. After four months of daily therapy and rehabilitation, Remi returned to full duty in February of 2016. Remi remained active working the street until September 20, 2016, when he suffered a career-ending injury during a K9 maintenance training day. An MRI showed that Remi had two ruptured discs in his spine. Remi underwent surgery for these injuries on October 6, 2016, and was officially retired from duty on October 20, 2016. Remi has now started his therapy treatment and rehabilitation as he adjusts to his retirement life at home with Perry, his wife Brandi and their two baby girls Gracelyn and Hopelyn. 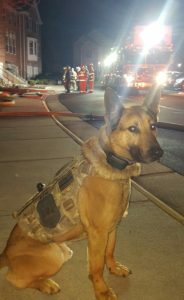