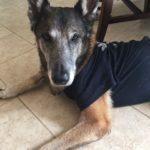 K9 Oscar retired from the Secret Service on November 1, 2015, at age 10, after 8 years of explosives detection service including Presidential Detail and Special Events. The government, “having determined that the cost of its care and handling is so great…” transferred ownership of Oscar to his handler, Officer Santiago Rivera. Officer Rivera voluntarily took on the financial responsibility of Oscar’s care for the remainder of his life so that his K9 partner could spend his retirement with the family who loved him.

In August 2017, Oscar was taken to the vet because he was not eating well and had a swollen abdomen. An exam and x-rays revealed that Oscar had a very large mass in his abdomen, which an ultrasound showed to be attached to his spleen. Most splenic masses in older dogs are hemangiosarcomas, which are very aggressive cancers that have an extremely poor prognosis, even with surgical removal and chemotherapy (4-6 months life expectancy). Oscar’s mass was extremely large, about the size of a basketball, which meant that rupture of the mass and sudden death could occur. Surgical removal, while possible, would be very complicated and risky. It would also be very expensive, at about $5,000-$6,000. Many owners, in this situation, would elect for humane euthanasia given the substantial risk and cost of surgery with a likely poor prognosis. 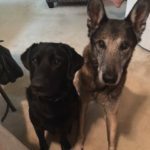 Thanks to Paws of Honor, Officer Rivera, and his family did not have to weigh the cost of surgery in their decision. After a thorough discussion with Dr. Felton, of Old Dominion Animal Health Center, regarding the surgery, the recovery process, and possible complications and risks involved, the Riveras elected to pursue surgical removal of the mass.

Oscar went in for surgery on August 23, 2017, with hugs from the worried Rivera family. After a difficult and tense two-hour-long surgery, a 15.5 lb. mass was removed from his abdomen. Oscar weighed 79 lbs. when he came in for surgery and 63.5 lbs. afterward. The tumor was 20% of his body weight! While his prognosis remained guarded through recovery and the pending pathology results, Oscar held his own and was able to go home two days later.
On August 26, 2017, the pathology results came in: splenic hematoma!! The enormous growth was a benign tumor that is cured by removal and has an extremely favorable prognosis! Even though the odds were stacked against it, Oscar’s story had a happy ending. We, at Paws of Honor, are so pleased and thankful to have had a part in Oscar’s care. Oscar is still doing well at home and will always have a special place in our hearts! 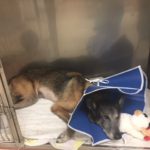 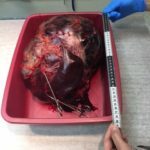