Ogden was born 11/2015 and started in the seeing eye dog program. He failed out of the seeing eye dog program when he growled playing tug with people, even though that’s something he always does when he plays. Ogden was then sent to the ATF to be trained as an Explosives Detection K9. Ogden became my partner early in 2007 and worked until 2014. During his working career, he spent time overseas and working day today in the DC area. Now that he’s retired, he spends his days napping and going to work with my uncle where he helps him sell tractors and lawnmowers. A huge thanks to Paws of Honor of giving back to these working dogs who have served their country. 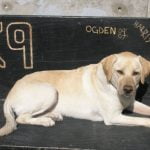 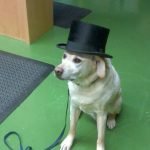