U.S. President Barack Obama waves at people in a bank vestibule after he and Vice President Joe Biden (not pictured) bought lunch at a sandwich shop near the White House in Washington, October 4, 2013. REUTERS/Jonathan Ernst

Ciela’s a sweet near 13-year-old Malinois. She’s a retired secret service working dog. She began her training back in 2006 to be an explosive detection dog and she excelled at it from day 1. Her handler had the chance to work with her until 2014 when she retired. She’s worked all over the united states as well as many visits overseas. She’s slowed down quite a bit since her working days but she still acts like a pup at heart. She was an amazing detection dog and an even better partner. 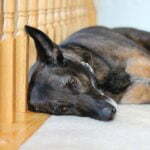