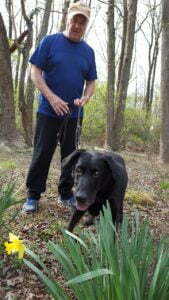 Charlie was born January 08th, 2008, and served in the US army from 2009- August of 2013. According to his military K-9 handler, Charlie conducted over 300 missions in Afghanistan with no death or injuries to US personnel. During Charlie’s Army service he had injured his left front paw while exiting the Hum V vehicle (Charlie tried to jump out while the door was being closed). Charlie required medical attention for a bleeding paw. Charlie was treated for a head injury during his service and contracted a virus that has affected his eyesight in January of 2013, Charlie started his service with the United States Capitol Police, assigned to Sgt. Michael Dodgson, Charlie was six years of age. Charlie’s service consisted of explosive detection for visiting Heads of State, POTUS, VPOTUS, and other high-profile events. Charlie has worked two Presidential Inaugurations, five State of the Unions, one convention and numerous large extraordinary events like the Fourth of July Celebration at the Capitol. He also did daily explosive sweeps at various vehicular checkpoints.

Christmas of 2017 was Charlie’s last working day and he has retired again, after 2 careers. He started his retirement spending January in Florida with Mike and his wife, Beth. Charlie’s eyesight has steadily deteriorated and he depends on his family during their walks and in unfamiliar places. He is happiest sleeping the day away on the family sofa.

To make a donation to the medical care of Charlie or any of our other retired K9s go to: